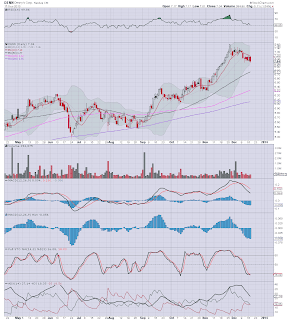 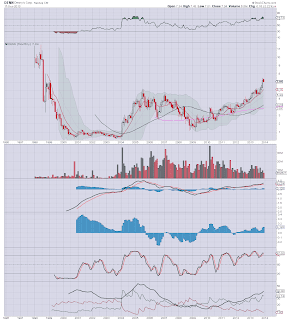 *occasionally, I'll look at a random stock..and this one was inspired by a kooky video from Redlettermedia

DENN is an Interesting company, and the last few years have seen it broadly soar from the collapse wave lows of 2003 and 2009.

See WIKI, for a broad summary

The past few years have seen revenue fall around 10%. The one good thing, Denny's remains moderately profitable, with net margins of just over 5%. Not exactly inspiring, but then the restaurant companies usually struggle to push much above 7-10%..even when everything is going well in the broader economy.

In terms of price, DENN is offering a rather clear bull flag on the daily charts.

Next upside is a break above the late Nov' high of $7.51. That certainly looks viable into early January.

The real target for the bulls should be the original IPO (Jan 1998) price of $10.00.  In the same month, it briefly hit $11.56..which remains the historic high. I will be particularly interested to see how it reacts if the broader market pulls lower in Q2/Q3 next year..before the next intermediate floor is put in.