GDX - a year of pain for the Gold miners

Whilst the broader equity market saw very strong gains across the year, the Gold miners saw very severe declines. The Gold miner ETF of GDX settled @ $21.13, a 2013 decline of $24.83 (-54%). The bigger monthly cycle is not yet offering any clear sign of a turn. 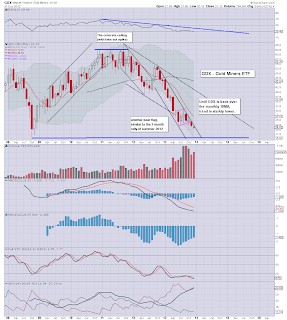 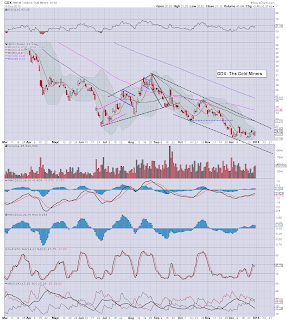 Along with the precious metals themselves, the miners have been in a world of hurt since the peak in late spring 2011. With Gold slipping from the $1900s to the upper $1100s, it has been no surprise at all to see the broad ETF of GDX having collapsed over half.

For GDX, that probably means a hit/test of the 2008 low in the $15s, before we see a decisive turn on the bigger monthly charts.