With the main indexes closing slightly higher, the 3x short financial ETF (FAZ) slipped another 0.5% lower. Despite the last few days though, FAZ remains above the important recent low in the $16s. A few daily closes over $20 would be a very natural 'chase it higher' level. 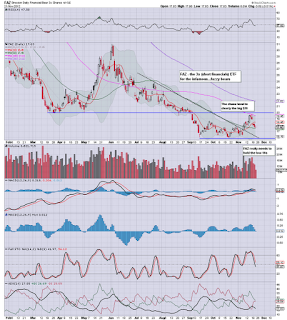 Its been a long time since I really looked at the 3x ETFs, and an even longer time since I personally traded them.

The infamous FAZ - by Direxion, was launched in Nov'2008 - ironically, at the very height of the financial crisis. Its been all downhill since then.

You will never find a better example of the statistical decay inherent in such leveraged derivative instruments.

There are two very clear price levels to be aware of. A break into the 15s would be the last stop level for the longs, and the $20 level would be the line in the sand for those who are bullish financials - and thus short FAZ.

If my bearish outlook for the indexes is correct, then we should see FAZ break above $20 in December.