Hewlett Packard (HPQ) slipped a further 2% to close @ $13.15 today. The trend is inexorably downward, and the next target remains the big psychological level of $10.00 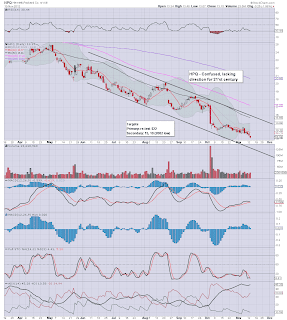 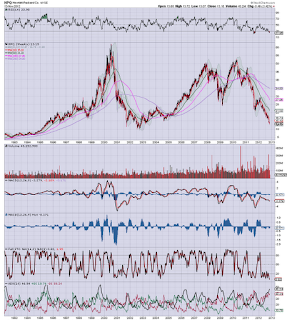 The underlying problems are known to many, and I will not be going into those today.

What is clear is that the price action remains downward. I've no doubt $10 will be hit, and there seems the very real possibility of a return to the $7 to $5 levels last seen almost twenty years ago. Incredible.

One issue I've not heard anyone yet suggest, is whether HPQ will remain a Dow constituent in 2013? At the current rate of decline, it will almost certainly be removed from the Dow in the second half of 2013. I suppose a natural replacement would be with AAPL, or even GOOG. There is no reason why either could not be in a slightly re-calculated Dow'30 index.

Now that's a prediction you should keep in mind for next year.
Posted by Trading Sunset at 21:10