With the main market still in a multi-day decline, the Russell small cap (3x leveraged) bearish ETF TZA climbed a further 1.5%, and closed @ 18.63. This is the fourth close above the important $17 level, with the next key level being around $20. 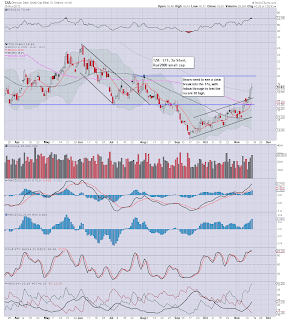 TZA floored the day after the Bernanke announced QE3, and has been generally climbing ever since, from the lowly level of $13.35.

Next target is $20, although..since TZA is a leveraged instrument, charting such things is rife with inherent issues.

Regardless, the general  trend remains UP, and even though today's candle was a slightly fat doji - often signalling a top, a reasonable stop level would be the daily 10MA @ 16.88, which will rise to the low 17s at the Friday open.
Posted by Trading Sunset at 21:09