Despite the indexes falling around 1.5% on the week, the VIX slipped lower by 11%. Both TVIX and UVXY suffered as a result, and closed the week in a very disappointing manner. The one consolation is that the TVIX/UVXY lows from October were not taken out. 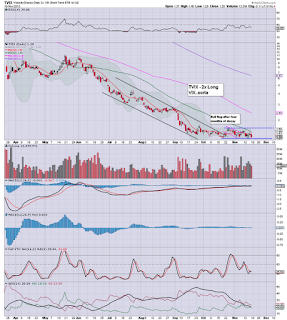 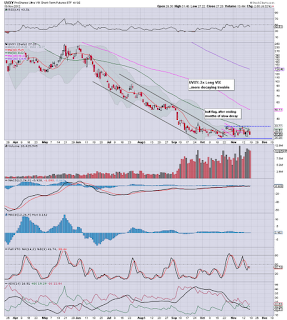 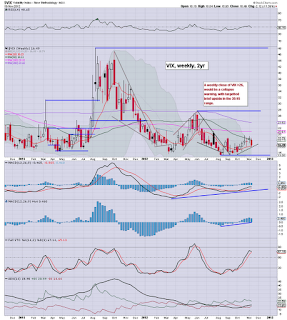 A very bearish week in the markets, yet the VIX itself declined a very bizarre 11% on the week. This market remains almost entirely fearless in the immediate term. It is important to recognise that VIX futures in the further out months are still holding up in the mid 20s.

As has been the case since the VIX floored in early August @ 13.30, the doomer bears are seeking an explosion in volatility.

Despite the index decline from sp'1474 to sp1343 (this Friday's low), the VIX has surprisingly failed to break above the key 20 level.

In many ways, the smarter - and arguably more patient traders, will be waiting to chase TVIX/UVXY higher, once the VIX breaks back over the important 20 threshold

My best guess is that VIX 20s will be seen in early December, whether we can spike into the 30s..and beyond, that IS the ultimate question right now.
Posted by Trading Sunset at 21:19